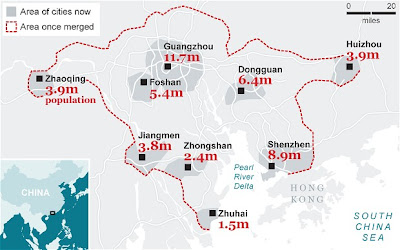 Thanks to Aftermath News for spotting Malcolm Moore and Peter Foster's piece in the Telegraph that China to create largest mega city in the world with 42 million people...

"City planners in south China have laid out an ambitious plan to merge together the nine cities that lie around the Pearl River Delta. The "Turn The Pearl River Delta Into One" scheme will create a 16,000 sq mile urban area that is 26 times larger geographically than Greater London, or twice the size of Wales. The new mega-city will cover a large part of China's manufacturing heartland, stretching from Guangzhou to Shenzhen and including Foshan, Dongguan, Zhongshan, Zhuhai, Jiangmen, Huizhou and Zhaoqing. Together, they account for nearly a tenth of the Chinese economy. Over the next six years, around 150 major infrastructure projects will mesh the transport, energy, water and telecommunications networks of the nine cities together, at a cost of some 2 trillion yuan (£190 billion). An express rail line will also connect the hub with nearby Hong Kong."

Yes, yet one more amazing thing here is that neither Hong Kong nor Macao are (yet) formally part of the plan! And to give you a sense of the scale here, this Pearl supercity is the same size in surface area as the entire Netherlands!
Posted by Joost Bonsen at 13:21