The Bodies by Boston 2011 article in Stuff by Scott Kearnan and Daniel Mccarthy with photos by Tim Gray spots this shapely Miss Fit!

"The pageant industry often battles criticism for promoting narrow notions of female beauty. And even when she was publicly winning crowns, Katie Boyd 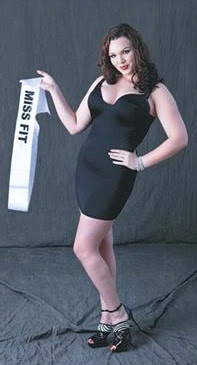 was losing a private battle with self-criticism. A pageant girl from her early teens, she felt enormous pressure to be swimsuit-svelte. So she exercised four hours a day, dabbled in growth hormones, took prescription meds to burn fat, and weighed her food before eating. She was a size zero, but her health was failing. [...] She decided to study exercise science at UMass Amherst and became a personal trainer for pageant competitors all over the country -- yielding national winners who diet and exercise in ways that are healthy for their bodies, minds, and self-esteem. Now 29, she even owns a training facility in Wellesley, the Miss Fit Club. [...] It's a reminder that glamorous girls come in all shapes. "I'm the healthiest I've ever been," says Boyd, now a size 10. "I no longer work out because I feel pressure to conform to a body style. I work out because it makes me feel good."