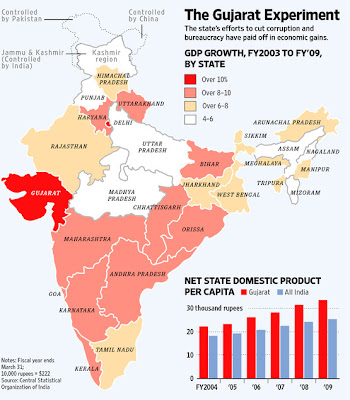 Geeta Anand and Amol Sharma write in the WSJournal, A Glimpse at India, Minus the Red Tape...

"Western India's Gujarat state has transformed itself into one of the country's economic and export engines by presenting an alternative to the red tape and widespread corruption that have stymied big projects elsewhere in the country, turning it into a springboard for the apparent national political ambitions of its controversial leader [Narendra Modi]. [Gujarat] has averaged more than 11% economic growth in recent years, well outpacing the national rate. It accounts for 5% of India's 1.2 billion people but 22% of the country's exports. Gujarat's approach -- mirrored in a handful of other business-friendly states such as Tamil Nadu -- offers one model for how India can fulfill its economic potential in the next decade and pave the way for hundreds of millions of poor Indians to move from subsistence living to an industrialized economy that will be a potent rival to China's."

Of course there are controversies and complaints from many quarters, but this is a fascinating economic testbed and market microcosm for India as a whole to learn from.
Posted by Joost Bonsen at 15:39

Nice article. What is the source of the map, did you create it?

The map was embedded in the cited original article and comes from the WSJournal and their sources.