Justin Gillis writes in the NYTimes that With Deaths of Forests, a Loss of Key Climate Protectors...

"Scientists have figured out -- with the precise numbers deduced only recently -- that forests have been absorbing more than a quarter of the carbon dioxide that people are putting into the air by burning fossil fuels and other activities. It is an amount so large that trees are effectively absorbing the emissions from all the world’s cars and trucks. Without that disposal service, the level of carbon dioxide in the atmosphere would be rising faster. The gas traps heat from the sun, and human emissions are causing the planet to warm. Yet the forests have only been able to restrain the increase, not halt it. And some scientists are increasingly worried that as the warming accelerates, trees themselves could become climate-change victims on a massive scale." 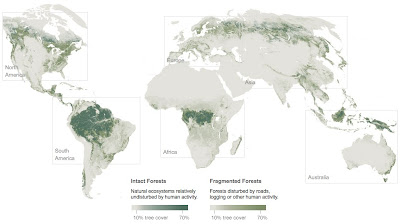