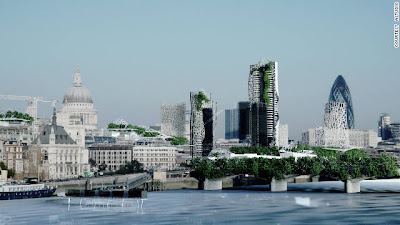 "As with any significant step-change, it's slow to take off," said Hyams. "From developers, to agents, to buyers themselves, people generally don't want to be the first to risk investment in a relatively untested industry when the costs are high." In addition, says Hyams, legislation is slow, "slicing off the worst building practices from the bottom, rather than advancing the best ideas at the top." [...] as the burden on cities to reduce their vast carbon footprints intensifies, the market will look to more radical solutions."

It's apparently Hyams vision for future London pictured above and in the CNN piece.
Posted by Joost Bonsen at 12:27