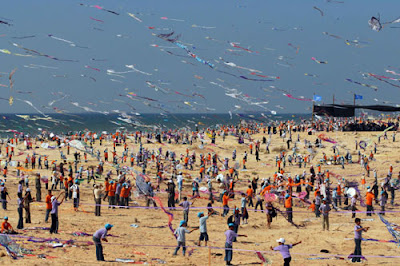 The 250,000 kids living in besieged Gaza can't do much about their geo-political plight, but they can build and fly kites! And they do -- lots of them! -- including the 2010 world-record breaking effort documented by Nitin Sawhney and Roger Hill in their Tayara Warakiya or Flying Paper film. UNRWA’s Gaza Summer Games 2011 included some thirteen thousand children wresting back the record from an ever competitive China! I first came to appreciate the kite-making kids and the power of their play from a NYTimes coverstory by James Bennet -- Rising Above, With Sticks, Paper and String -- which includes one my favorite vignettes...

"Wadiya seems to enjoy making kites as much as flying them. He gives most away to his friends, but he has held on to his favorite. Three crossed sticks of split bamboo give it a six-sided shape as broad as a manhole. The colors are of the Palestinian flag -- red, green, black and white. In the center, in gold, is the silhouette of Al Aksa Mosque in Jerusalem, one of Islam's holiest sites and the symbol of the Palestinian uprising. Yet when asked what he thinks about as he flies the kite above his damaged town, Wadiya, a serious boy, did not mention politics. His dream, he said, was to be an astronaut. He had never looked through a telescope, but he had seen pictures from space in books. "When I fly the kite, I think I'm on a different planet," he said. "I imagine myself someplace else."

Beautiful and inspiring words -- ones every kid can benefit from. Here's more of Wadiya and friends... 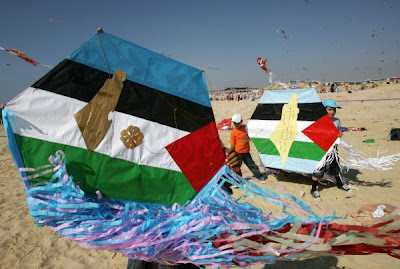 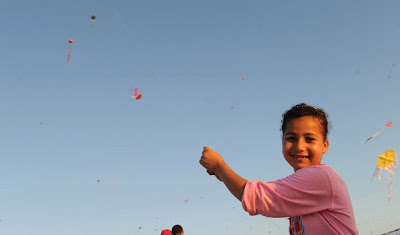 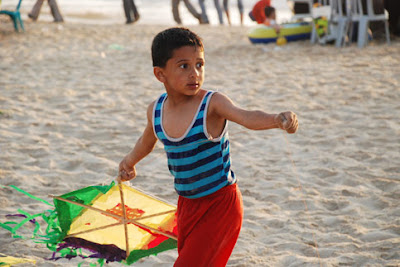 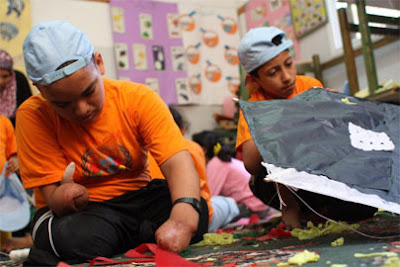 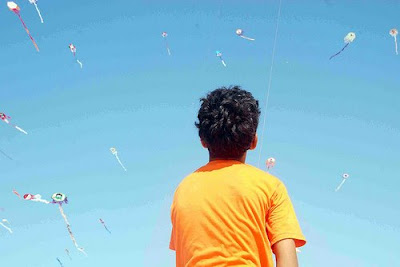 Fascinating design on one of those kites! Hmmm, it almost looks like a map of Israel! How wonderful are these Gazan children to pay homage to the State of Israel, their future neighbor living side-by-side in peace and harmony, by drawing an outline of their country next to theirs. Of course, that is all they want, right? RIGHT? If only they lifted that damned blockade! Then peace would break out and everyone would dance the debka and the hora!

Yes, those kids through their joyful actions and inspired art are spotlighting the fundamental illegitimacy of messianic wingnuts and their zealotry-driven invasion and territorial occupation of the contested lands. Peace can only come when illegal interlopers evacuate. But since most of the current squatters are irrational faith-freaks, they will not leave freely and peace will not likely happen. Thus we have the stalemate of today where the brutal and strong occupy and rule and the oppressed and weak suffer and resent. In the face of this stupidity, these kids fly kites.