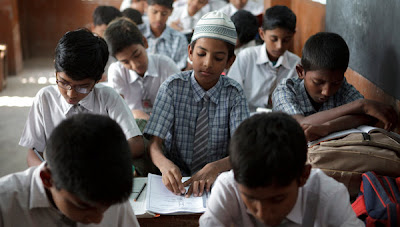 "In India, the choice to live outside the faltering grid of government services is usually reserved for the rich or middle class, who can afford private housing compounds, private hospitals and private schools. But as India’s economy has expanded during the past two decades, an increasing number of India’s poor parents are now scraping together money to send their children to low-cost private schools in hopes of helping them escape poverty. [But] faced with sharp criticism of the woeful state of government schools, Indian policy makers have enacted a sweeping law intended to reverse their decline. But skeptics say the litany of new requirements could also wipe out many of the private schools now educating millions of students."

"In the labyrinthine slum known as Dharavi are 60,000 structures, many of them shanties, and as many as one million people living and working on a triangle of land barely two-thirds the size of Central Park in Manhattan. Dharavi is one of the world’s most infamous slums, a cliché of Indian misery. It is also a churning hive of workshops with an annual economic output estimated to be $600 million to more than $1 billion. “This is a parallel economy,” said Mr. Mobin, whose family is involved in several businesses in Dharavi. “In most developed countries, there is only one economy. But in India, there are two.” India is a rising economic power, even as huge portions of its economy operate in the shadows. Its “formal” economy consists of businesses that pay taxes, adhere to labor regulations and burnish the country’s global image. India’s “informal” economy is everything else: the hundreds of millions of shopkeepers, farmers, construction workers, taxi drivers, street vendors, rag pickers, tailors, repairmen, middlemen, black marketeers and more."

See also photos on Getting Ahead in Dharavi by Adam Ferguson. 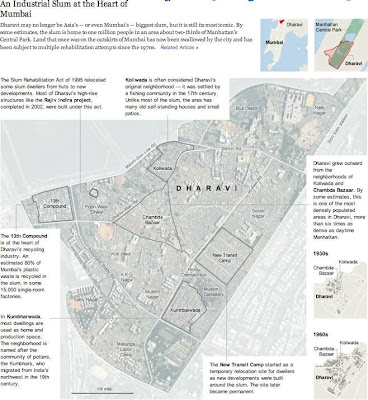