If a Tree Falls ~ Eco-Terrorism Documentary... 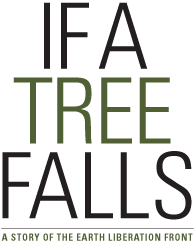 Thanks to NYTimes DotEarthling Andrew Revkin for spotting new documentary If a Tree Falls about the eco-terrorist Earth Liberation Front. Revkin interviews the director, Marshall Curry who mentions this important nugget asking how best to...

"...respond to non-violent civil disobedience. In the 90s the police use of tear gas and pepper-spray and nightsticks at protests radicalized a lot of activists and convinced them that the democratic system was broken. A portion of those people decided to take up arson in response. I think the film is suddenly a really important cautionary tale to activists to think carefully about tactics, and also a cautionary tale to law enforcement to think about their response to activism, because some responses bring people into the democratic argument and some responses radicalize people."