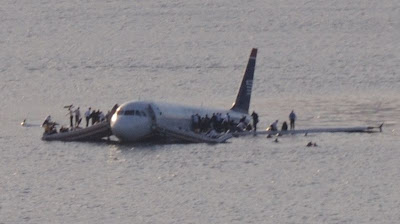 "On January 15, 2009, the aircraft flying this route, an Airbus A320-214, was successfully ditched in the Hudson River adjacent to midtown Manhattan six minutes after takeoff from LaGuardia Airport after being disabled by striking a flock of Canada geese during its initial climb out. The incident became known as the Miracle On The Hudson. The bird strike, which occurred just northeast of the George Washington Bridge about three minutes into the flight, resulted in an immediate and complete loss of thrust from both engines. When the crew of the aircraft determined that they would be unable to reliably reach any airfield, they turned southbound and glided over the Hudson, finally ditching the airliner near the USS Intrepid museum about three minutes after losing power. All 155 occupants safely evacuated the airliner."

This is because the Captain and crew executed flawlessly...

"Shortly after taking off, Sullenberger reported to air traffic control that the plane had hit a large flock of birds, disabling both engines. Several passengers saw the left engine on fire. Sullenberger discussed with air traffic control the possibilities of either returning to LaGuardia airport or attempting to land at the Teterboro Airport in New Jersey. However, Sullenberger quickly decided that neither was feasible, and determined that ditching in the Hudson River was the only option for everyone's survival. Sullenberger told the passengers to "brace for impact", then piloted the plane to a smooth ditching in the river at about 3:31 P.M. All passengers and crew members survived. He later said, "It was very quiet as we worked, my co-pilot and I. We were a team. But to have zero thrust coming out of those engines was shocking -- the silence." Sullenberger walked the unflooded part of the passenger cabin twice to make sure everyone had evacuated before retrieving the plane's maintenance logbook and being the last to evacuate the aircraft."

Contrast this with Costa's Shitty incompetence, lack leadership, and immorality. Then see here visualization of the US Airways emergency situation plus real-life air traffic control signals... And post-analysis with Captain Sully himself on 60 Minutes...
Posted by Joost Bonsen at 15:40