Drew Hinshaw writes in the WSJournal, In an African Dynamo's Expansion, the Perils of Prosperity...

"In 2011, Ghana's economy is forecast to grow 13.5%, a clip that exceeds every other country in the world 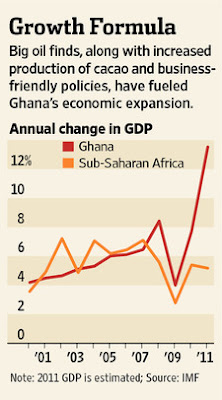 except Qatar, according to the International Monetary Fund. Big oil finds pumped growth beyond 2010's 7.7%. As growth stagnates in the U.S. and Europe, Ghana's robust multiparty democracy has turned its capital into a hub for companies chasing business -- on a continent that grew 5.5% this year, according to the IMF. [...] Ghana's growth has made the nation of 24 million Africa's newest middle-income country, joining Namibia, Botswana and South Africa. Nigeria will soon join them, economists forecast. [...] But Ghana's bottlenecks are curbing what economists say could be even faster growth, offering lessons for other African countries that may follow a similar path of development."

"From Senegal to Sierra Leone, start-ups, decrepit local carriers and even international airlines are out to prove that jet travel can extend beyond deep-pocketed passengers to West Africa's flourishing middle-class and business travelers. [...] West Africa has some of the world's fastest-growing economies, including that of Nigeria, the continent's most populous nation. The International Monetary Fund projects that Ghana's economy will grow 13.5% this year. The International Civil Aviation Organization expects Africans to fly 8% more miles in 2012 and 8.3 % more in 2012, making the continent earth's fastest-growing for air travel behind Asia and the Middle East. And industry analysts say traffic here could expand even faster as competition heats up, pushing prices down. But the new airlines are flying into some of the world's most dysfunctional airspace." 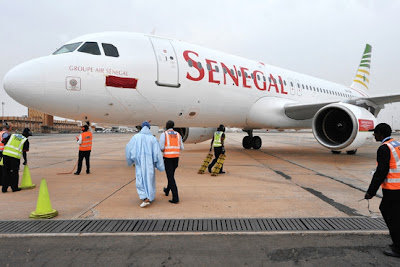