The BBC today asserts Food production 'must rise 70%' to save us from mass-starvation by 2050. I've written before about the emergent Global Food Crisis. And a lot about food-related things, including city farms & robogardeners, sky farms, urban share-farms, agri-history, tuna harvests, ocean ranching, emerging market agri-innovations, even Meeting Your Meat, and more. But ever since seeing Star Trek Replicators pump out chow on-demand... 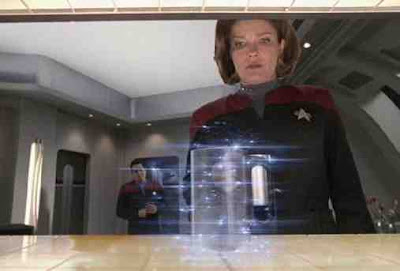 ...I've known-imagined this as a potential alternative. Neil Stephenson's Diamond Age envisions MC's -- Matter Compilers -- playing this role, cranking out synthetic snacks as needed. But what will it take to invent such solutions? I've written about In Vitro Meats, which I think is a step in the synthetic direction, but there's much more to be done to have a full menu of proteins, carbs, vitamins, and caloric goodness generally, all synth'd by 'bot. But if successful, such a system would mean Food = Energy (plus component raw material) and that radically changes the Doomsayer argument away from one of agricultural land and productivity to one of energy sourcing and pricing.
Posted by Joost Bonsen at 17:19