"Although Nintendo had been the No.-2 buyer of MEMS in consumer electronics during 2007 and 2008, the company in 2009 increased its purchase of gyroscopes -- a MEMS sensor for measuring or maintaining orientation -- for use in the Wii Motion Plus plug-in" [...] Dropping to second place after a two-year run at the top was Samsung. "From 2005 to 2007, Digital Light Processing (DLP) chips for rear-projection televisions accounted for most of Samsung’s MEMS consumption," Bouchaud said. "However, with Samsung exiting the DLP market, its overall consumption of MEMS in 2009 declined [...] Nonetheless, Samsung remains a high-volume purchaser of BAW filters for duplexers and quintplexers, and the company was also the top buyer of MEMS microphones last year." 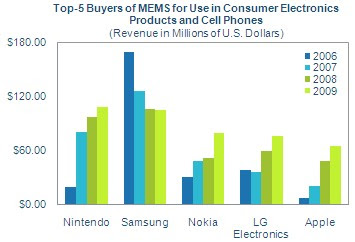