Very compelling NYTimes article on The Female Factor: A Female Approach to Peacekeeping by Doreen Carvajal...

"Women of the United Nations police and peacekeeping forces that entered Liberia after the civil war have inspired a new generation of Liberian women to don uniforms. [...] "When female soldiers are present, the situation is closer to real life, and as a result the men tend to behave..." [...] As modern peacekeeping has evolved into nation building, the number of female police officers in U.N. peacekeeping missions around the world has doubled during the past five years to 833, or more than 6 percent of a force of 12,867. Nigeria and India are top contributors to a total that is still far below the international goal of 20 percent. In some missions -- notably Darfur and Liberia -- women are edging closer: Women account for 14 percent of the 1,354 police peacekeepers in Liberia."

Be sure to see the related video, Securing the Peace in Liberia... 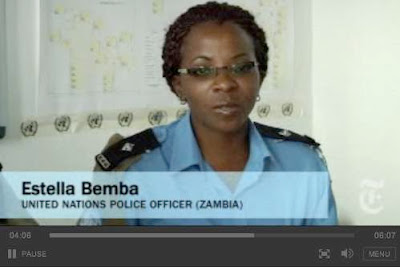