Corpus Coranicum ~ The Origins of a Holy Book 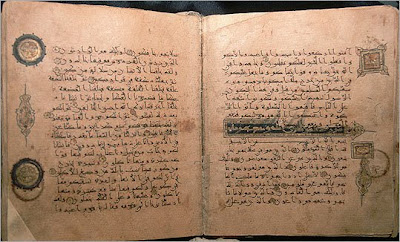 Fascinating to read Drake Bennett's Globe Ideas piece The origins of a holy book about creating the Corpus Coranicum, a...

"...central repository of imagery, information, and analysis about the Muslim holy book. Modern research into Islam’s origin and early years has been hampered by the paucity and inaccessibility of ancient texts, and the reluctance of Muslim governments in places like Yemen to allow wide access to them. But, drawing on some of the earliest Korans in existence -- codices found in Istanbul, Cairo, Paris, and Morocco -- the Corpus Coranicum will allow users to study for themselves images of thousands of pages of early Korans, texts that differ in small but potentially telling ways from the modern standard version. The project will also link passages in the text to analogous ones in the New Testament and Hebrew Bible, and offer an exhaustive critical commentary on the Koran’s language, structure, themes, and roots."

Curiously enough, as Bennett notes, in 1516 the Dutch scholar Erasmus compiled the Novum Instrumentum omne, one of the first critical editions of the Bible which so challenged the dominant Latin translation that it helped catalyze the Reformation, an important element of the intellectual revolution which ultimately allowed modern Europeans to shed ever more of the religious irrationalities of their past.
Posted by Joost Bonsen at 21:23