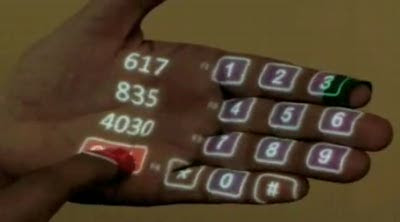 Last week in our MIT Media Ventures class we hosted Professor Pattie Maes who runs the Fluid Interfaces group and co-directs the Program in Media Arts & Sciences. Pattie spoke about her earlier work in intelligence augmentation, the creation of software agents acting on peoples behalf. This work led to numerous spinoff companies, including Agents Inc, later known as Firefly and bought by Microsoft, and Frictionless Commerce, later bought by SAP. Interestingly enough, both of these were examples of "premature innovations" offering up services like recommendation engines, collaborative filters, online marketplaces, and more well before companies and users were ready for them! More recently, her research agenda has shifted towards human-information interfaces which blend with everyday surroundings or which invigorate everyday objects. Alumnus David Merrill videoconferenced in from the West Coast to describe his own doctoral thesis work Siftables and his spinoff firm Sifteo founded to commercialize these cookie-sized computers and the many applications thereof. Then we shifted to work with grad student Pranav Mistry, the SixthSense project which Pattie spoke of at TED... Pranav then spoke about his evolving design thinking and of course latest efforts with SixthSense. Finally doctoral student Sajid Sadi spotlighted his designs, including showing the aware utensils which track ones food consumption!
Posted by Joost Bonsen at 13:47