Today the USA commemorates an epic achievement, the rallying together by thoughtful civic and business leaders among the British colonists to formally articulate new and empowering principles of government. They proclaimed the Declaration of Independence, perhaps one of the most immortal of human political achievements! And this was very much a crafted and drafted document, with no less than Thomas Jefferson at the quill. So it's fascinating to see Susan Walsh's photo and read this AP newswire piece Library of Congress reveals slip made by Jefferson in draft of Declaration...

"Librarian of Congress James Billington pointed out where Thomas Jefferson originally wrote "subjects" before changing it to "citizens" in the rough draft of the Declaration of Independence. [...] it appears Jefferson used his hand to wipe the word “subjects’’ out while the ink was still wet. A distinct brown smudge is apparent on the paper, although the word itself is not legible without the help of the digital technology. "It shows the progress of his mind," said James Billington, librarian of Congress. "This was a decisive moment." 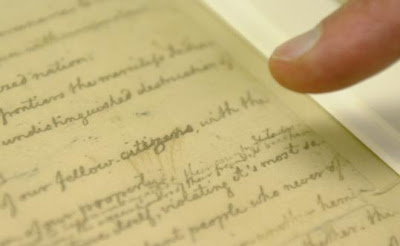