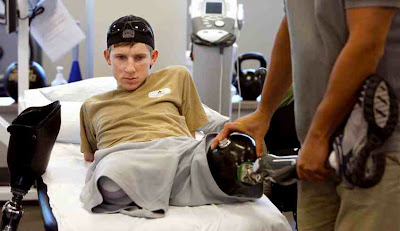 On this US Independence Day, it's inspiring to read Lizette Alvarez's piece in the NYTimes Spirit Intact, Soldier Reclaims His Life, about US Army Specialist Brendan Marrocco...

"...who a year before had come so close to death that doctors still marvel over how he dodged it. At 22, he was a spry, charming infantryman in the United States Army with a slicing wit and a stubborn streak. Then, on Easter Sunday 2009, a roadside bomb exploded under his vehicle, and he became the first veteran of the wars in Iraq and Afghanistan to lose all four limbs in combat and survive. In the nearly 15 months since, Specialist Marrocco has pushed past pain and exhaustion to learn to use his four prosthetics, though he can walk for only 15 minutes at a time."

He's the most extreme of the nearly one thousand US service members who have lost limbs in combat this past decade. Given my earlier post about MIT's H2.0 initiative, I think of SPC Marrocco as an extraordinary Lead User of the latest augmentation technologies. As he recovers and learns with his new limbs -- and, indeed, helps refine and develop them -- he IS a Human 2.0. This is both epic and heroic.
Posted by Joost Bonsen at 22:32