Eric Moskowitz writes in the Globe about competing visions for the future of the Longfellow Bridge in his piece, Linking Cities and Eras...

"...the rebuilding of the Longfellow is about more than saving it from collapse. It comes at a time when key policy makers, from Boston’s mayor to the Obama administration, have pledged to rethink transportation and pull back from decades of favoring drivers and cars over bicycles and walkers. As a result, the Longfellow has emerged as a touchstone and test case in the debate over urban transportation, with officials, highway engineers, civic leaders, and community advocates grappling over whether to reclaim some of the pavement used by automobiles to make more room for everybody else. It is a thorny issue that remains unresolved even as construction begins on a bridge that is both a treasure to preservationists and a lifeline for thousands who traverse it each day by subway, car, bicycle, and foot."

Here, for instance, you can see the cross-section plans proposed by the Livable Streets Alliance (versus the MassDot plans or the current situation)... 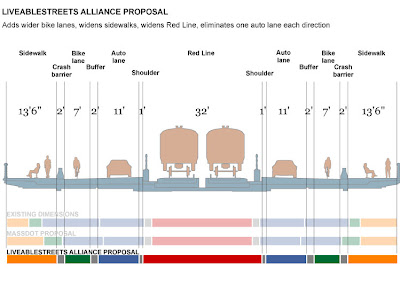 In any case, renewal is sorely needed, as this Portrait of the Aging Longfellow illustrates...
Posted by Joost Bonsen at 06:29