CIVETS ~ Most Dynamic of Emerging Markets There's new spinonyms popping up all the time! Today I first heard of CIVETS -- short for the emerging markets of Colombia, Indonesia, Vietnam, Egypt, Turkey and South Africa. Here's Schott's Vocab commentary and Hutchinson at MorningMoney (with a deeper, but very skeptical tour of each country) and Thomson's piece in the WashPost and Margolis's piece in Newsweek, which actually clued me in! Reuters quotes HSBC CEO Michael Geoghegan who coined CIVETS...

"Each has a very bright future […] Each has large, young, growing population. Each has a diverse and dynamic economy. And each, in relative terms, is politically stable. Emerging markets will grow three times faster than developed countries this year and are driving global recovery, he said. "Within three years, for the first time, the economic firepower of emerging markets will overtake the developed world, measured by purchasing power parity. It's a defining moment." The size of the emerging market middle class will swell to 1.2 billion people by 2030, from 250 million in 2000, he said."

Jonathan Russell of the Telegraph wonders if Geoghegan's...

"...thought this one through though? Apart from a dubious link between six fairly disparate countries the only other thing a civet is, is a small cat-like tropical animal that is of little use to any economy, other than in its liking for coffee beans. And our liking for those same coffee beans -- once they have passed through its digestive tract. “Exotic dung coffee”, one of the most expensive coffees in the world, has first passed through the bowels of the Asian Palm Civet." 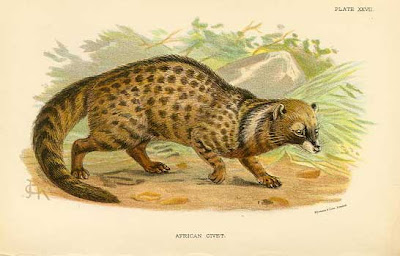