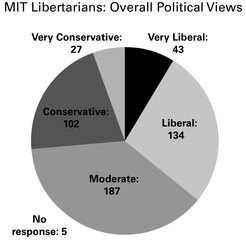 MIT's student newspaper The Tech surveyed both undergrad and grads about their political outlook. Today opinions editor Ethan Solomon writes of MIT’s Libertarians ~ 23 percent of students identify as libertarians. Roughly a fifth of students responded and of those nearly a quarter consider themselves "small-ell" libertarians -- meaning with libertarian outlook but not necessarily supportive of the Libertarian Party. Indeed...

What's especially fascinating is that MIT in several key ways has been an incubator of the modern libertarian movement. Many MIT people are anti-authoritarian, prone to spoofing or hacking the powerful. Others fight for fundamental freedoms online and off. The philanthropic Koch family of MIT alums includes a former Libertarian vice-presidential candidate, David Koch. Libertarian party founder David Nolan was an MIT alumnus (RIP) and active while on campus in fighting the growing stupidity reigning in the liberal and conservative political wings. He's creator of the Nolan Chart illustrating how the classic left vs right political spectrum was inadequate... 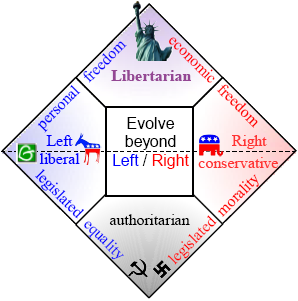 I like your pictorial Nolan Chart. Too bad it doesn't plot the questions along it as "points" like his did. I want to see one with 200 or so nuanced questions. It would also be interesting to see one with a vector for anarchists that tugs a dot around the outer perimeter, closest to the anarchist "off the map" dot. (Useful for anarcho-socialists or "anarcho-syndicalists" / nihilist-collectivists).

It might also be interesting to have chronological curve, plot motion to the dots. Before the fall of the state, sometimes people are libertarians, after the theoretical fall of the state, they might suddenly shift to being collectivists. Liberal anti-prohibitionists might fall into this category, where ending the corrupted state is simply a desired means of correcting the state's functions.