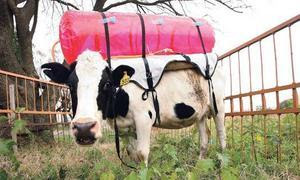 "The so-called "backpacker cow" was developed by a group of experts from the National Institute of Agricultural Technology (INTA) working since 1996 on the effects of agricultural activities and livestock on global warming. It is a kind of plastic bag that stores the gases produced these animals in their stomachs, which affect much of the emissions produced by Argentina, which has always boasted of having more cows than people. "It consists of an electronic system, fitted with a harness in the back of cattle, which is coupled to a system of nozzles communicated directly to the area where the gases are formed that contain methane," said Guillermo Berra"

Wow, 15 years in the making! Note they don't show the gas-capture nozzles in the photo; must be an intellectual property issue;-)
Posted by Joost Bonsen at 10:41