Nicholas Casey writes in the WSJournal about the horrors as Migrants Fall Prey to Mexican Gangs on Way to the U.S...

"Kidnapping Central American and Mexican immigrants is one of the latest rackets of Mexican organized-crime groups, which are expanding beyond drugs into pirated DVDs, illegal alcohol sales and business extortion. Just this year, more than 4,000 immigrants have been rescued by the Mexican army and federal police from their captors, according to government statistics. Because authorities say only a fraction of those kidnapped are ever rescued, the figures suggest that gangs kidnap tens of thousands of migrants each year. The victims, almost always headed to the U.S., are captured by gangs where they are ransomed back to relatives, forcibly recruited as workers or sometimes sold into prostitution."

This is seriously not good. Migrants are among the most vulnerable and yet ambitious of humanity and deserve special favor and protection. We ought to do and be better here. 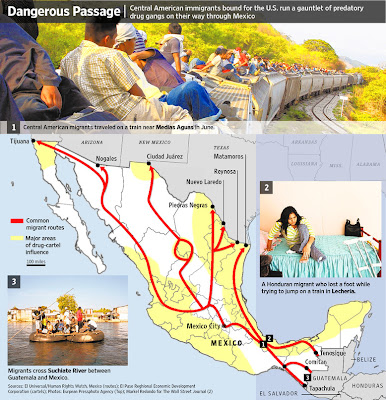