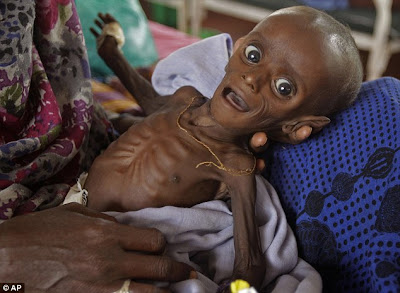 Wil Longbottom writes in the DailyMail of the growing humanitarian disaster in East Africa, a situation we all can see from the essential images by photographer Schalk van Zuydam...

"Cradled in his mother's arms, this is the face of a skeletal seven-month-old baby starving to death in the Horn of Africa. Weighing just seven pounds -- as much as a newborn -- Mihag Gedi Farah stares wide-eyed, his skin pulled taut over his ribs and tiny arms. Mihag is just one of 800,000 children who officials warn could die across the region in the worst drought for decades. Aid workers are rushing to bring help to dangerous and previously unreached regions of drought-ravaged Somalia. Many starving children and adults remain in the country far from the feeding tubes and doctors in field hospitals in refugee camps in Kenya and Ethiopia. Sirat Amine, a nurse-nutrionist with the International Rescue Committee, said Mihag has just a 50-50 chance of survival. The little boy should weigh three times what he does now. His mother, Asiah Dagane, said: 'In my mind, I'm not well. My baby is sick. In my head, I am also sick.' A nurse at the camp said Mihag was 'severely, severely malnourished'. She added: 'We never tell the mother, of course, that their baby might not make it. We try to give them hope.' Mrs Dagane brought Mihag and four siblings from Kismayo to Kenya after all their sheep and cattle died. Their journey took a week."

How the hell could this happen?! What the F#<& is going on?

"Tens of thousands of Somalis are fleeing the starvation, many of them on foot, from Kismayo and the capital Mogadishu. The UN estimates that more than 11 million people in East Africa are affected by the drought, with 3.7 million in Somalia among the worst-hit because of the ongoing civil war in the country. Somalia's prolonged drought became a famine because neither the government nor many aid agencies can operate in areas controlled by Al Qaeda-linked militants."

So what we have here, as a minimum, is a natural disaster in an environmentally and economically vulnerable region compounded by yet more religio-fascist terrorism turning the situation into an enormous humanitarian atrocity.

"...now recovered after being treated by the International Rescue Committee's hospital in Dadaab [...] After three life-saving blood transfusions and intensive feeding with Plumpy’nut, a vitamin-enriched peanut paste, Minhaj reached 4.1kgs (9.03 pounds) and was released from the hospital and treated for tuberculosis in an IRC outpatient program. Today, three months after he was released, Minhaj is unrecognizable. 'His mother never thought he would recover. Every member of his family is happy,' said Sirat Amin, a nurse-nutritionist." 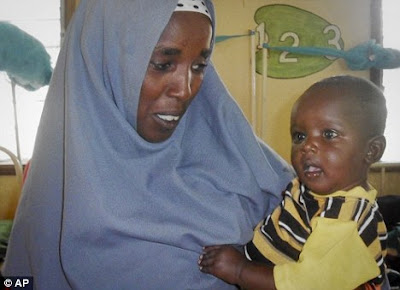 Now that brings joy to my heart...