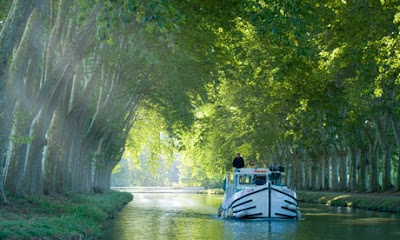 The Guardian's Angelique Chrisafis writes French to say au revoir to canalside trees. They must chop down thousands of trees alongside the Canal du Midi as...

"An unstoppable fungal disease has left the French state no choice but to reach for the chainsaw, bringing down the ceiling of leaves covering the nation's most romantic waterway. The felling of these 200-year-old trees is seen as a national tragedy. Cyclists, walkers and canal-boat owners are gutted, and local politicians are panicked that the canal's Unesco heritage status will be revoked, wrecking tourism."

The Canal du Midi is a centuries-old, 240 km long southern French transport route helping link Atlantic and Mediterranean. An epic infrastructure and logistics "gigaproject" in the 17th century, today the canal is a beautiful and much-loved waterway for vacationers.
Posted by Joost Bonsen at 08:17