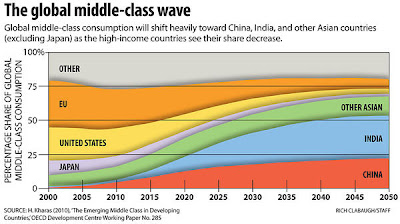 "The world will, for the first time in history, move from being mostly poor to mostly middle-class by 2022, the Organization for Economic Cooperation and Development projects. Asians, by some predictions, could constitute as much as two-thirds of the global middle class, shifting the balance of economic power from West to East. [...] "I would expect that as the global middle class gets transformed by the entrance of hundreds of millions of Indian, Brazilian, and Chinese families, the concept of what we see as the middle-class values may change," says Sonalde Desai, a sociologist with the National Council of Applied Economic Research in Delhi (NCAER). "Historically, sociologists have defined 'middle class' as those with salaries…. I think 'middle class' is very much a state of mind." [...] That presents opportunities both for local entrepreneurs and multinationals -- and could change the products available to the West. [...] "As companies have begun to sell into emerging markets, they've had to innovate – both multinationals and local companies. They've learned to do things at a much better value-to-price ratio," says Ms. Stephenson, coauthor of a 2010 McKinsey report on emerging-market growth. "Now, what you're starting to see is a lot of that innovation flow back. These new low-cost innovations are beginning to disrupt Western markets. The emerging market story is really a global story."

Many compelling lessons to be learned here!
Posted by Joost Bonsen at 10:41