Nationalism Rules ~ FP on The State as Cult... 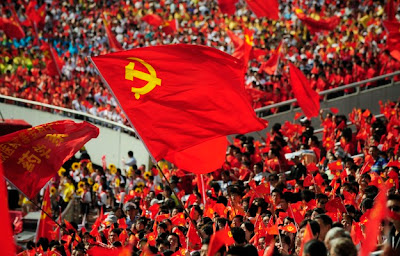 Stephen Walt writes in FP that Nationalism Rules about The State...

"What's the most powerful political force in the world? Some of you might say it's the bond market. Others might nominate the resurgence of religion or the advance of democracy or human rights. Or maybe it's digital technology, as symbolized by the Internet and all that comes with it. Or perhaps you think it's nuclear weapons [But] the Strongest Force in the World would be Nationalism. The belief that humanity is comprised of many different cultures -- i.e., groups that share a common language, symbols, and a narrative about their past (invariably self-serving and full of myths) -- and that those groups ought to have their own state has been an overwhelmingly powerful force in the world over the past two centuries. [...] Nations -- because they operate in a competitive and sometimes dangerous world -- seek to preserve their identities and cultural values. In many cases, the best way for them to do that is to have their own state, because ethnic or national groups that lack their own state are usually more vulnerable to conquest, absorption, and assimilation. [...] Modern states also have a powerful incentive to promote national unity -- in other words, to foster nationalism -- because having a loyal and united population that is willing to sacrifice (and in extreme cases, to fight and die) for the state increases its power and thus its ability to deal with external threats. [...} Once established, a nation-state is a self-reinforcing phenomenon. [...] Unless we fully appreciate the power of nationalism, in short, we are going to get a lot of things wrong about the contemporary political life. It is the most powerful political force in the world, and we ignore it at our peril."

What's so especially distasteful to me about Nationalism is, alas, not explicitly spelled out in this piece -- but it's inexorably implied -- namely that those who support The State will do anything to keep it in power, to reinforce its position, to inculcate its importance, to endow it with mystical powers and mythological qualities. In short, to create the Cult of The State, something as poisonous to the planet and hurtful to humanity as organized religion.
Posted by Joost Bonsen at 16:50