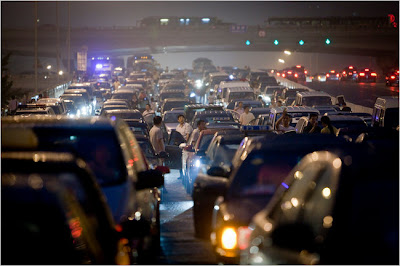 Traffic: Into Reverse Robert Wright writes in the FT...

"...though London’s traffic-charging scheme has cut congestion by 14 per cent in the west-central area of the city, the area is being removed from the zone [...] 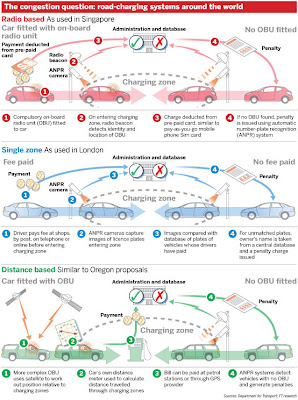 on Thursday 20 sq km of Chelsea and other parts of west-central London will be removed from the capital’s congestion-charging zone -- the area drivers must pay to enter during weekday working hours – reducing it to its original 22 sq km. Even Transport for London, the body responsible for the scheme, acknowledges this will worsen jams. Vehicle numbers are expected to rise by 15 to 20 per cent. Congestion -- measured by the extra time a journey takes compared with clear road conditions -- is poised to worsen by as much as 18 per cent. Emissions of harmful gases will go up sharply. The end of charging in west-central London is one of many signs that sentiment across the industrialised world has turned against efforts to substitute, or supplement, traditional fuel-based taxes on motoring with direct charges."

At the same time, Michael Wines writes in the NYTimes that Multiplying Drivers Run Over Beijing Traffic Plan...

"Never let it be said that China, proud consumer of more than half the planet’s cement, thinks small. Except, perhaps, this time. For in the latest match between Beijing’s build-baby-build bureaucrats and its Gordian knot of traffic, more than a few folks are betting on the knot. “We have built many flyovers and expressways,” said Zhao Jie, a transportation expert at the China Academy of Urban Planning and Design. “We have spent quite a lot of money on subways and bus lines, and Beijing probably has the lowest bus fares in the world. But the stimuli to car ownership are even more powerful.” [...] As of December, Beijing counted 4.7 million registered vehicles, with 2,000 new ones joining the clog each day. That is more than 700,000 new vehicles this year, which was up from 550,000 new vehicles last year, 376,000 in the preceding year and 252,000 the year before that. When the number reaches 6.5 million, traffic researchers calculate, the Beijing streets will be fully saturated." 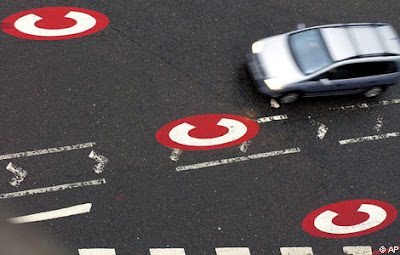