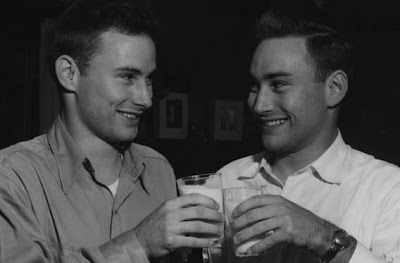 Sad to hear Ronald Herrick passed away (left in photo). Over a half-century ago he voluntarily made medical history for the sake of his dying twin brother Richard (right in photo). Writes Bryan Marquard in the Globe...

"On Dec. 23, 1954, Dr. Joseph Murray removed a kidney from Ronald and implanted it in Richard. Years later, Murray shared a Nobel Prize for his groundbreaking work. For the Herrick twins, the results were more immediate and personal. Ronald gave Richard about eight more years of life. [...] Mr. Herrick knew he was risking his life by volunteering for surgery that had never been attempted. [...] "It was just one of those things that was kind of out of this world, I thought," he told National Public Radio in 2004 for a report on the 50th anniversary of the transplant. "It was something that hadn’t been done before, you knew nothing about it. So I thought about it a long time... My stomach was churning many a morning going to school." In an autobiography, Murray recalled those moments when it seemed that the transplant team held its breath. "There was a collective hush in the operating room as we gently removed the clamps from the vessels newly attached to the donor kidney," he wrote. "As blood flow was restored, the patient's new kidney began to... turn pink. There were grins all around." With an identical twin as a donor, the kidney was a perfect fit."

And today there's a thriving organ donation process, we're getting ever better at preserving organs for donation and even regenerating artificial replacements.
Posted by Joost Bonsen at 13:44