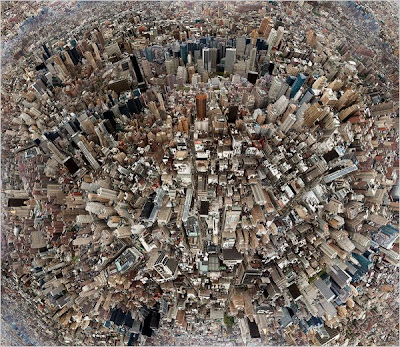 Thanks to Jonah Lehrer for writing A Physicist Solves the City in the NYTimes about Geoffrey West and colleagues who wanted...

"...to study cities as if they had never been studied before. [West] was tired of urban theory -- he wanted to invent urban science. For West, this first meant trying to gather as much urban data as possible. Along with Luis Bettencourt, another theoretical physicist who had abandoned conventional physics, and a team of disparate researchers, West began scouring libraries and government Web sites for relevant statistics. [...] After two years of analysis, West and Bettencourt discovered that all of these urban variables could be described by a few exquisitely simple equations. For example, if they know the population of a metropolitan area in a given country, they can estimate, with approximately 85 percent accuracy, its average income and the dimensions of its sewer system. These are the laws, they say, that automatically emerge whenever people “agglomerate,” cramming themselves into apartment buildings and subway cars. It doesn’t matter if the place is Manhattan or Manhattan, Kan.: the urban patterns remain the same."

Their paper, Urban Scaling and Its Deviations: Revealing the Structure of Wealth, Innovation and Crime across Cities by Bettencourt et al, spotlights...

"... the fundamental role of nonlinear agglomeration integral to the life history of cities. [...] As a result larger cities are disproportionally the centers of innovation, wealth and crime, all to approximately the same degree. We use these general urban laws to develop new urban metrics that disentangle dynamics at different scales and provide true measures of local urban performance. New rankings of cities and a novel and simpler perspective on urban systems emerge." 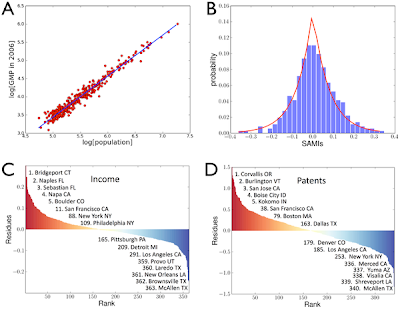