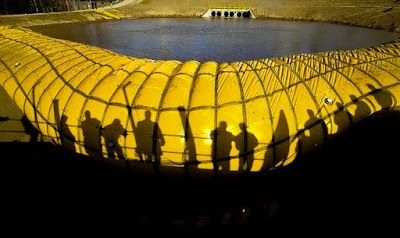 Flood Plug Minds the Gap writes Joe Barrett in the WSJournal about the PLUG -- or Portable Lightweight Ubiqitous Gasket...

"...the first tool designed to repair a breach while powerful floodwaters are still coursing through it. Developed by the

Army Corps of Engineers, the 104-foot-long, vinyl-coated tube can be transported by helicopter to a failing levee and filled with floodwater on the spot using pumps. The resulting sausage-shaped behemoth gets sucked into the breach by the force of escaping water, sealing off the flow until permanent repairs can be made. [...] For the first full-scale demonstration on Dec. 15, the yellow PLUG was stretched across the middle lake and pumped full of water. With just its top visible, it looked like an upside-down life raft. Mr. Resio gave the signal to open the floodgates, sending an eight-foot-deep torrent into the lower lake. Pulled along by a million pounds of pressure from the rushing water, the PLUG slowly began to roll toward the gates. Within a minute, the 15-foot-tall PLUG came more clearly into view as its middle wedged into the center of the gate structure and its two ends rode up the sides of the spillway. The flood slowed to a trickle. "Nothing made by human hands has ever been able to stop that kind of flow" in a breach, said Brian Banning, a critical-infrastructure specialist with the California Emergency Management Agency who came to Vicksburg to watch. Mr. Banning cautioned that much work remains before the PLUG is ready to face a real emergency, complete with raging winds, unstable soils and treacherous waters carrying trees and other debris."