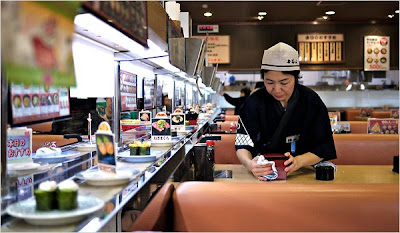 "Efficiency is paramount at Kura: absent are the traditional sushi chefs and their painstaking attention to detail. In their place are sushi-making robots and an emphasis on efficiency. Absent, too, are flocks of waiters. They have been largely replaced by conveyors belts that carry sushi to diners and remote managers who monitor Kura’s 262 restaurants from three control centers across Japan. [...] Instead of placing supervisors at each restaurant, Kura set up central control centers with video links to the stores. At these centers, a small group of managers watch for everything from wayward tuna slices to outdated posters on restaurant walls. [...] Each Kura store is also highly automated. Diners use a touch panel to order soup and other side dishes, which are delivered to tables on special express conveyor belts. In the kitchen, a robot busily makes the rice morsels for a server to top with cuts of fish that have been shipped from a central processing plant, where workers are trained to slice tuna and mackerel accurately down to the gram. Diners are asked to slide finished plates into a tableside bay, where they are automatically counted to calculate the bill, doused in cleaning fluid and flushed back to the kitchen on a stream of water. Matrix codes on the backs of plates keep track of how long a sushi portion has been circulating on conveyor belts; a small robotic arm disposes of any that have been out too long. Kura spends 10 million yen to fit each new restaurant with the latest automation systems, an investment it says pays off in labor cost savings. In all, just six servers and a minimal kitchen staff can service a restaurant seating 196 people, said a company spokesman, Takeshi Hattori. “Its not just about efficiency,” Mr. Hattori said. “Diners love it too. For example, women say they like clearing finished plates right away, so others can’t see how much they’ve eaten.”

P.S. Here's latest update with tablet to order and on-demand robo-delivery of custom dishes...
Posted by Joost Bonsen at 15:26