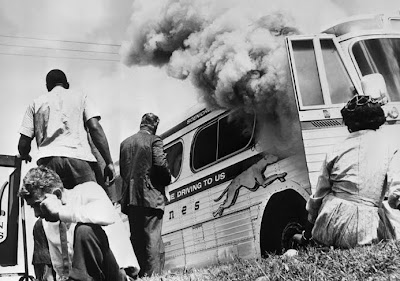 Thanks to Shelia Byrd from the AP for spotlighting Stanley Nelson's documentary Freedom Fighters...

"The film [...] recounts the 1961 crusade by daring young activists intent on ending segregated travel on interstate buses in the Deep South. [...] Most of the riders were college students coached in the art of nonviolent protest by veteran activists, including the Rev. James M. Lawson, Jr. The students, both black and white, knew they were risking their lives by traveling on Greyhound and Trailways buses into the rigidly and violently segregated South. Nelson said the great lesson of Freedom Riders is how ordinary citizens -- much like the hundreds of activists who rode into the South -- can bring about change. "It really says that this movement was a movement of people," Nelson said. "Nobody else will ever be a Martin Luther King. What Freedom Riders said is that you don't have to be."