Dean Takahashi writes in VentureBeat about How Microsoft engineered Kinect to withstand gamers and lightning strikes...

"Microsoft engineers spoke publicly for the first time yesterday about how they built the Kinect motion sensing system, offering a rare glimpse inside the secret world of product design. After being taken to task for designing Xbox 360 game consoles that failed in large numbers, Microsoft turned a corner: Very few customers have returned the Kinect add-on for the Xbox. One of the reasons was the engineering discipline that the company applied in the wake of its defect scandal. [...] Some people might have the impression that Microsoft simply bought the technology for Kinect, since it did in fact buy several companies that focused on detecting motion in a three-dimensional space. Despite those acquisitions, Microsoft actually did a lot of the engineering in-house. It had to pull together the expertise to create a high-level 3D sensing system — with gesture recognition, video and audio — that had to be dead-simple for consumers to use, and it had to build the system from scratch in 18 months." 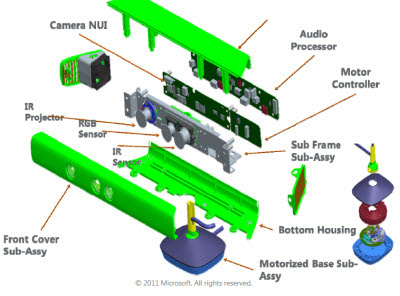 The Kinect is huge as the first commercial "smartbulb" and the beginning what I bet will be a compelling additional device and app ecosystem rivaling smartphones and smartpads.
Posted by Joost Bonsen at 13:22