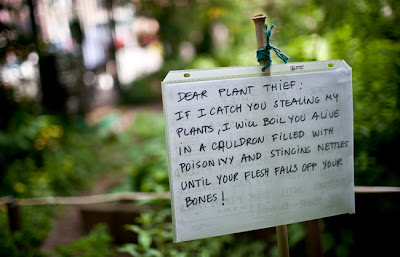 Robin Finn writes in the NYTimes of a growing garden menace -- a truly immoral and sordid under-class of culinary criminals -- in her piece Pilfered Peppers in City Gardens; Tomatoes, Too...

"...the first commandment should be obvious: Thou shalt not covet, much less steal, thy neighbor’s tomatoes, cucumbers or peppers. But people do. [...] By midsummer, the urban irritant of garden pilferage was in full bloom, right in sync with the crops, the heat and the mosquitoes. On a recent evening, Jackie Bukowski, president of the West Side garden, was batting away biting insects while talking about the thefts from the garden, which has 87 vegetable plots under cultivation. She recalled her disbelief last summer when hundreds of ripe figs were looted overnight. “Every single one of them, gone,” [...] “I know that people who garden in the country have trouble with squirrels and deer and turkeys; here in our neighborhood, we have old ladies,” he said. “They’re the culprit.” [...] Theft was a given. This summer the pepper crop is under tight surveillance. “Last August someone stole every pepper in the garden,” Ms. Freedom recounted. “We’ve lost not only ripe veggies but whole plants and garden ornaments to these folks who want to take an easy way around growing their own. I caught a woman taking all of our honeysuckle blossoms because it was cheaper than buying them in Chinatown.”

What a bunch of verminous vegans! They're really rather worse than looting locusts and ravenous rats combined -- they're plundering macro parasites, all of them!
Posted by Joost Bonsen at 08:48