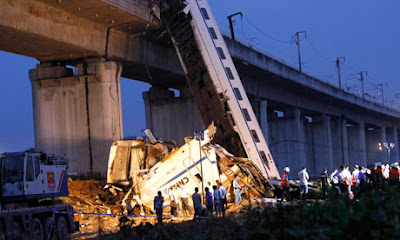 Tom Lasseter writes in the CSMonitor that After China train crash, it's not just rail safety that worries Chinese...

"China's bullet train was supposed to signal its arrival as a high-tech leader. Instead, a crash that killed at least 40 people has made it a lightning rod for anger at the human cost of recklessly fast development. [...] More than anything, the aftermath of the high-speed train wreck last month in Zhejiang province has come to underline the fact that for all of China's enormous economic growth, the nation is still overseen by an opaque, authoritarian regime frequently plagued by corruption. It's a system that relies in large part on the promise of material progress for its people, with the threat of heavy-handed tactics for those who step out of line. During the past nine days, that approach has seemed especially off-balance. In trying to explain, or not explain, the events that caused one train to rear-end another on July 23, officials ordered the media to censor reports on the accident, made announcements that strained credulity and then blamed a confusing jumble of factors including lightning, badly designed equipment and poorly trained workers. Interviews with passengers on the trip between Beijing and Shanghai over the weekend suggested that in addition to worries about rail safety, the incident has for some reinforced a sense of unease with the pace of the nation's development. No one spoke about a seismic shift that would threaten the government's hold on power, but most obviously had spent time thinking about the implications of the wreck. "I think it's an issue of national credibility..."

Images of Chinese high-speed train wreck from the Guardian articles... 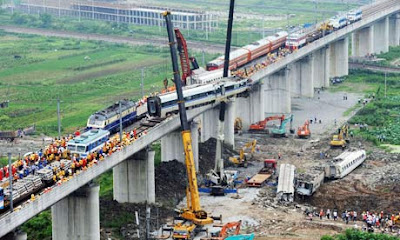