The Soviet hardliner attempted coup twenty years ago, 19-21 August 1991, triggered the dissolution of the USSR by Christmas that year. An amazing period in history but still shrouded in mystery as the FT's Moscow chief Charles Clover writes in Last days of the USSR...

"...the failure of the GKChP [coup committee] has long been characterised as a triumph for democracy over the forces of reaction, people over politburo. It was a pivotal episode in the extraordinary year of 1991, which academics and statesmen now speak of in the same breath as 1789 and 1917: a moment of inflection between the paradigms of totalitarian rule and liberal democracy. In this story, the Soviet coup provides a microcosm: the two systems collided, and one emerged victorious. As Yeltsin said afterwards: “One century ended, the century of fear, and another began.” The image of the ordeal remains Yeltsin standing on a tank, an elected leader facing down the gun." 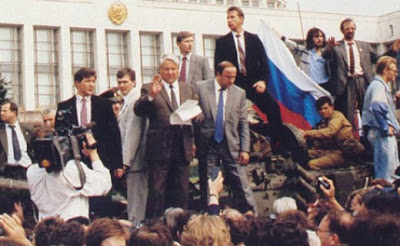 "The only problem with this reading of the putsch is that it doesn’t sit well with the facts. The more one delves into those three days, the more shadowy and shifting they become. The vital, decisive moments had very little to do with democracy, or the march of history; what counted in the crisis was the superior ability to mystify, mislead and manipulate. This was a clash of conspiracies, and the best conspiracy won."

Take a look at a contemporary newscast to get a sense of just how disconcerting these events in Moscow were. People really thought this was prelude to a bloody civil war... But with tank commanders shifting sides and the word spreading of Yeltsin and the defenders of the parliament, the coup collapsed, and by Friday, 23 August 1991, Russians had pulled down the statue of KGB founder Felix Dzerzhinsky right in front of the KGB headquarters in Moscow! 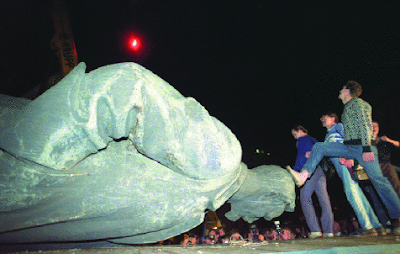 And by Christmas, Gorbachev resigned live on global satellite TV! Amazing! And, of course, there's far more to the backstory as shared by Der Spiegel's Christian Neef in a joint interview with Gorbachev and his piece The Gorbachev Files: Secret Papers Reveal Truth Behind Soviet Collapse. In any case, the saddest thing about all this is that 70 years of pervasive and pernicious Communist dictatorship has been difficult to undo and the subsequent two decades has been extraordinarily disruptive for the common citizenry. Perhaps in another decade or so Russians will finally achieve their rightful measure of prosperity. The Guardian spotlights what happened with the former elements of the Soviet empire...