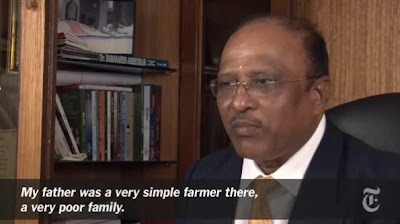 Very interesting story by Lydia Polgreen of the NYTimes on Rags to Riches: Scaling Caste Walls With Capitalism’s Ladders in India...

"The untouchable boy had become golden, thanks to the newest god in the Indian pantheon: money. As the founder of a successful offshore oil-rig engineering company, Ashok Khade is part of a tiny but growing class of millionaires from the Dalit population, the 200 million so-called untouchables who occupy the very lowest rung in Hinduism’s social hierarchy. “I’ve gone from village to palace,” Mr. Khade exclaimed, using his favorite phrase to describe his remarkable journey [...] “This is a golden period for Dalits,” said Chandra Bhan Prasad, a Dalit activist and researcher who has championed capitalism among the untouchables. “Because of the new market economy, material markers are replacing social markers. Dalits can buy rank in the market economy [...] “We are fighting the caste system with capitalism” [...] Messy industries like construction are closer to the traditional occupations of the lowest castes. [...] “In this complex society, Dalits are turning disadvantage into an advantage”