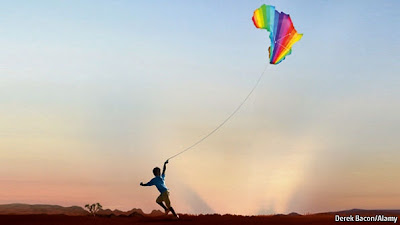 The latest Economist spotlights Africa Rising and notes how The sun shines bright on the continent's future...

"Over the past decade six of the world’s ten fastest-growing countries were African. In eight of the past ten years, Africa has grown faster than East Asia, including Japan. Even allowing for the knock-on effect of the northern hemisphere’s slowdown, the IMF expects Africa to grow by 6% this year and nearly 6% in 2012, about the same as Asia. [...] Optimism about Africa needs to be taken in fairly small doses, for things are still exceedingly bleak in much of the continent. [...] some fundamental numbers are moving in the right direction. Africa now has a fast-growing middle class: according to the World Bank, around 60m Africans have an income of $3,000 a year, and 100m will in 2015. The rate of foreign investment has soared around tenfold in the past decade. [...] Africa’s enthusiasm for technology is boosting growth. It has more than 600m mobile-phone users -- more than America or Europe. Since roads are generally dreadful, advances in communications, with mobile banking and telephonic agro-info, have been a huge boon. [...] All this is happening partly because Africa is at last getting a taste of peace and decent government. [...] At a dark time for the world economy, Africa’s progress is a reminder of the transformative promise of growth."