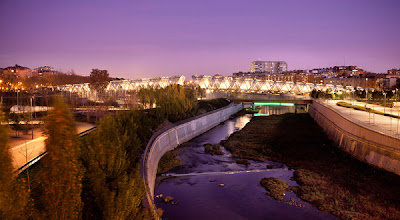 Nice NYTimes piece by Michael Kimmelman on the Madrid Río -- In Madrid’s Heart, Park Blooms Where a Freeway Once Blighted...

"More than six miles long, it transforms a formerly neglected area in the middle of Spain’s capital. Its creation, in four years, atop a complex network of tunnels dug to bury an intrusive highway, also rejuvenates a long-lost stretch of the Manzanares River, and in so doing knits together neighborhoods that the highway had cut off from the city center. All around the world, highways are being torn down and waterfronts reclaimed; decades of thinking about cars and cities reversed; new public spaces created. [...] But Madrid Río is a project whose audacity and scale, following the urban renewal successes of Barcelona, Spain’s civic trendsetter, can bring to a New Yorker’s mind the legacy of the street-grid plan, which this year celebrates its 200th anniversary. That’s because the park belongs to a larger transformation that includes the construction of dozens of new metro and light-rail stations that link far-flung, disconnected and often poor districts on Madrid’s outskirts to downtown."

Very compelling! Plus check out photos by James Rajotte. And DotEarthling Andrew Revkin weighs in, noting how Madrid Joins Cities Replacing Concrete With Greenery and spots this Madrid Río promo...
Posted by Joost Bonsen at 19:36