Merry Newtonmas ~ Reasons Greetings To All!

Merry Newtonmas to one and all! To quote the oracle...

"As an alternative to celebrating the religious holiday Christmas, some atheists, skeptics, and other non-believers have chosen to celebrate December 25th -- the birthday Newton shares with Jesus Christ -- as Newtonmas. 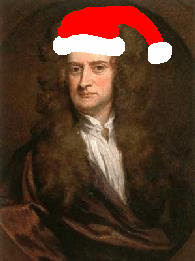 Celebrants send cards with "Reasons Greetings!" printed inside, and exchange boxes of apples and science-related items as gifts. The celebration may have had its origin in a meeting of the Newton Association at Christmas 1890 to talk, distribute gifts, and share laughter and good cheer. The name Newtonmas can be attributed to the Skeptics Society, which needed an alternative name for its Christmas party. [Of course] Newton's birthday was December 25th under the Old Style Julian Calendar used in Protestant England at the time, but was January 4th under the New Style Gregorian Calendar used simultaneously in Catholic Europe. The period between has been proposed for a holiday season called "10 Days of Newton" to commemorate this."

And thanks Lisa Wade of Sociological Images for spotlighting this piece from Brit TV show QI on the Pagan Roots of Christianity -- i.e. before Newtonmas was Xmas it was Mithrasmas and Cavemanmas...
Posted by Joost Bonsen at 12:10