Terrible to hear iconoclastic oracle Christopher Hitchens has been consumed 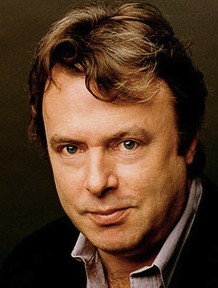 by his cancer. Never one to hold back or engage in half-measures, Hitchens was fighting life's scourges -- social, political, philosophical, and biological -- till the last possible moments. Writes Juli Weiner in Vanity Fair...

"At the end, Hitchens was more engaged, relentless, hilarious, observant, and intelligent than just about everyone else -- just as he had been for the last four decades. “My chief consolation in this year of living dyingly has been the presence of friends,” he wrote in the June 2011 issue. He died in their presence, too, at the MD Anderson Cancer Center in Houston, Texas. May his 62 years of living, well, so livingly console the many of us who will miss him dearly."

CH's brother Peter remembers him in the DailyMail and salutes his courage. See here VF's pointer to all CH's appearances with Jon Stewart on the DailyShow. The Guardian summarizes CH's best bon mots. Here's CH's last interview with Richard Dawkins in the New Statesman. And thanks to Cynical-C for spotting Best of Hitchslap clips...
Posted by Joost Bonsen at 09:19