Gregory White and Rob Barry write of Russia's Dubious Vote in the WSJournal and spotlight the many Fingerprints of Fraud...

"A comprehensive examination of the full results from Russia's nearly 100,000 voting precincts reveals statistical anomalies that experts say are consistent with widespread vote-rigging. These irregularities could cast doubt, by one rough measure, over as many as 14 million of the 65.7 million votes reportedly cast. [...] statistical analysis revealed phenomena that scholars who study vote data say are suggestive of vote-rigging.‬ "These are sometimes called the fingerprints of fraud," said Alberto Simpser, professor of political science at the University of Chicago. "If they all point in the same direction," he said, referring to statistical as well as observer and other evidence, "that's a very strong case."‬ The results are studded with groups of precincts that report exact round numbers for voter participation -- say, a turnout of 70%, 75% or 80%, up to 100%. Several groups of precincts also report similarly high round numbers of voters for United Russia. Such round figures occur significantly more frequently than nearby figures -- a phenomenon statisticians say is highly unlikely to come from a random distribution of numbers.‬" 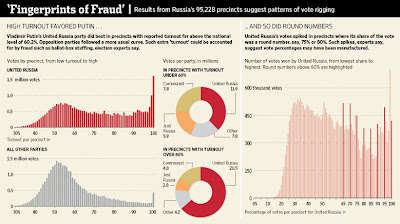