The Solar Storms imagery from yesterday got me wondering about Sunspots. It turns out there's a periodic pattern to spots, almost like a flu season, but for the Sun! Here's more imagery and data, first NASA Earth Observatory images of Solar Maximum & Minimum...

"Solar and Heliospheric Observatory (SOHO) spacecraft compare sunspots on the Sun’s surface (top row) and ultraviolet light radiating from the solar atmosphere (bottom row) at the last solar maximum (2000, left column) and at the current solar minimum (2009, right column.) The sunspot images were captured by the Michelson Doppler Imager (MDI) using filtered visible light. On March 18, 2009, the face of the Sun was spotless..."

"The other set of images, acquired by the Extreme Ultraviolet Imaging Telescope (EIT), shows ultraviolet light radiating from the layer of the atmosphere just above the Sun’s surface. This part of the solar atmosphere is about 60,000 Kelvin -- a thousand times hotter than the surface of the Sun itself. On July 19, 2000, the solar atmosphere was pulsating with activity: in addition to several extremely bright (hot) spots around the mid-latitudes, there were also numerous prominences around the edge of the disk. On March 18, 2009, however, our star was relatively subdued..."

Here's a decade worth of min-to-max... 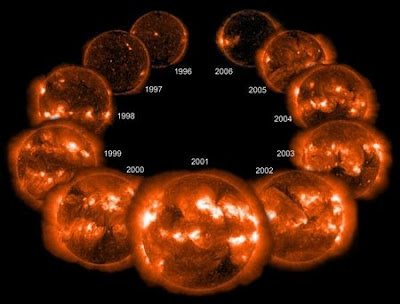 SunTrek shows how Sunspots move over time (and change in shape)! Even more cool is that...

"Galileo was the first to discover how fast the Sun spins by studying the movement of sunspots. The Sun spins? You bet! Even more amazing, some parts of the Sun spin faster than others." 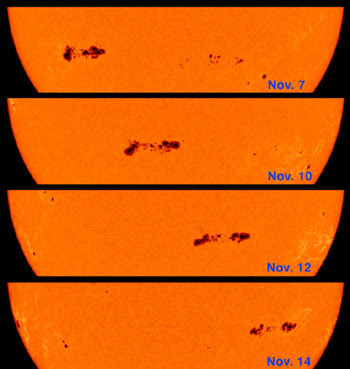 Another way of visualizing patterns is via this Butterfly Diagram... 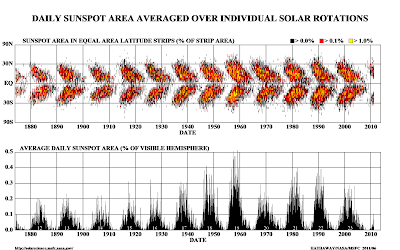 Finally, movies via the Helioviewer!
Posted by Joost Bonsen at 17:15