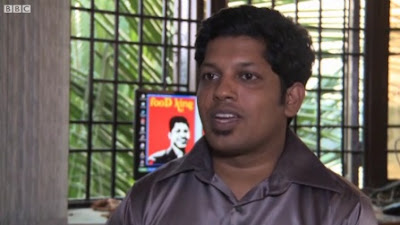 BBC's My Business correspondents Parul Agrawal and Heather Sharp tell of The slum dweller who founded a food chain -- Sarath Babu the Foodking who...

"...now employs 250 people in his fast-growing catering empire. Born to a family with next to nothing, Sarath dreams of an India without hunger. He has set himself the target of providing for half a million people, by creating 100,000 (known as one lakh) jobs. "I give a job, and that person takes care of four to five people -- so I take care of five lakh people directly," he says. [...] Sarath launched Foodking in 2006, supplying snacks to banks, software firms and other corporates, with just 2,000 rupees (£24; $38) to fund the first month. But with his impressive academic pedigree, he was soon able to secure a bank loan of 100,000 rupees (£1,205; $1,890), and employed eight to 10 workers. The expansion continued, and he now has seven outlets and an annual turnover of $1.3m. [...] Sarath's drive remains strong. He wants to have 100 outlets by the end of this year -- and 5,000 across the state eventually. [...] He already gives lectures at schools and business institutes, and spends time encouraging children in a local slum to continue studying. And he hopes to inspire 1,000 entrepreneurs across the state, who too would go on to create employment opportunities for others."