Thanks to Businessweek's Daniel Grushkin for reviewing Biopunk: DIY Scientists Hack the Software of Life by Marcus Wohlsen who...

"...introduces the grass-roots movement of biotech enthusiasts who are moving genetics beyond traditional labs -- and into kitchens, garages, and workshops. For the uninitiated, 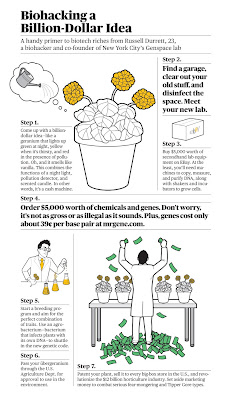 that probably sounds incredibly dorky or incredibly creepy. Wohlsen weighs both hypotheses and arrives at a third: Biopunks, he argues, are on the edge of a technological revolution comparable only to the one started by the shaggy übergeeks who built the first personal computers. Like programming nerds, biohackers may have some social quirks, but their gatherings also share the same potential for creative disruption. These hackers, Wohlsen explains, come to biology for a multitude of reasons: some for the pleasure of learning, others for the power of bending life to their whim. The movement has also produced a burgeoning class of entrepreneurs who see the kernels of billion-dollar ideas coming out of their biotech playtime. While the first biohacker tycoons have yet to emerge, Wohlsen believes they may well be on their way."

Many MIT-related peeps mentioned, including Knight, Belcher, and Endy. Synthetic Biology is indeed a powertool for tomorrow's wetware craftologists.
Posted by Joost Bonsen at 23:51