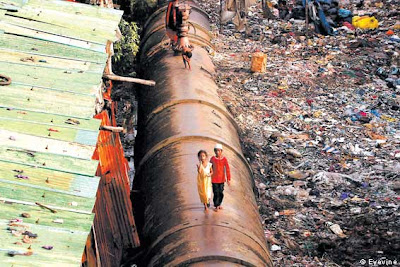 "...in the world’s most crowded city, with an average population density of 20,038 per sq km, verticality is seen as both a necessity and a virtue. While the rich love high-rises for their glamour and views, the more than 8m people who live in Mumbai’s slums are being forced into vertical living, as powerful property developers seek profits amid the city’s desperate shortage of land. Although in principle the redevelopment of slums offers residents better living conditions, it has become intensely controversial as many are left homeless and corruption runs rampant. [...] More than half of Mumbai’s population of 12.4m are slum-dwellers. They are working poor and lower-middle class, by no means destitute, but unable to afford Mumbai’s sky-high rents. Although they are poor relative to buyers of luxury high-rises, they have something else that counts: the slums are known locally as “vote banks”, since whoever wins the slums has a hefty block of the electorate in the bank. [...] “Slum-dwellers want to move into flats, but the redevelopment needs to be done with community involvement,” says Chandrashekhar Prabhu, an architect who has been involved with several slum rehabilitation schemes."

Read the rest of the piece, plus sidebar, for rich additional details. Bottom-line: There's lots of challenges in seeking sustainable and scalable slum solutions.
Posted by Joost Bonsen at 22:47