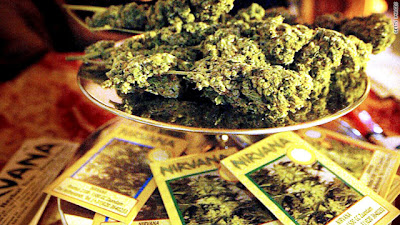 Wayne Drash from CNN shares the appalling news that Dutch to ban foreigners from pot shops...

"The Netherlands plans to ban foreigners from the country's famed pot shops [a.k.a. "coffeeshops"], a decision Amsterdam's tourism industry hopes goes up in smoke. [...] "Persons who do not hold Dutch citizenship will not have access to the coffee shops," the Dutch Ministry of Security and Justice said in a statement."

This is a big step backwards away from classic Dutch policies of liberty and tolerance and openness. And, as a minimum, it ought to be illegal to discriminate among different EU citizens. Beyond these freedom fundamentals, however, is the sheer stupidity of official reasoning...

"The Cabinet expects that closure of coffee shops to foreign drugs tourists will ensure that they no longer travel to the Netherlands to purchase and consume cannabis. After all, many of them can use the illegal markets..."

In other words rather than tolerating the legal, regulated suppliers, the incompetent officialdom wants to encourage the growth of informal drug resellers -- a.k.a. scalpers -- and unregulated, illegal dealers. Just brilliant. As I've noted before, the Dutch Retreat from civilized liberty is dismaying.
Posted by Joost Bonsen at 12:17