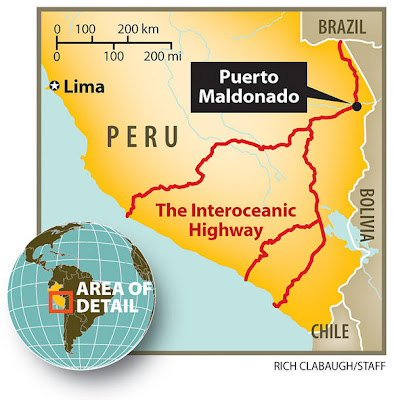 Quite interesting to read Steven Bodzin's piece in the CSMonitor on Peru's new highway to the future...

"After decades of delay, Peru is on the verge of completing the $2.75 billion Interoceanic Highway connecting [...] Brazil to the west coast. [Millions of] Brazilians and Peruvians will see their lives change radically once they live along the continent’s first true transcontinental highway. [...] The last major link in the Interoceanic Highway, a bridge over the Madre de Dios river 143 miles away, is set to open this month. The last rivet in the bridge will be like the golden spike which, in 1869, completed North America’s first transcontinental railroad. There is a road connecting Argentina to Chile, and a roundabout route through Bolivia. But this is the first two-lane, year-round highway across the continent's waist, from the Amazon directly to the Pacific. From Sao Paulo, near the Atlantic, the highway traverses 2,439 miles of Brazil, crossing coastal hills, soy-farming plains, and the cattle pastures where Amazon rain forest once stood. At last [...] it crosses the Acre River into Peru."

This is as big a deal as the Trans-Siberian Railway or the US Interstate Highways. I hope it's followed with railway infrastructure investments too. And by a renewed emphasis on other links, including finishing the Darién Gap in the Pan-American Highway.
Posted by Joost Bonsen at 23:24