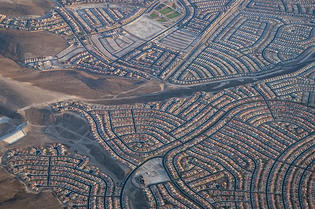 Charles Marohn of Strong Towns writes in Grist that The American suburbs are a giant Ponzi scheme... "

...the underlying financing mechanisms of the suburban era -- our post-World War II pattern of development -- operates like a classic Ponzi scheme, with ever-increasing rates of growth necessary to sustain long-term liabilities. [Via the three growth] mechanisms, the local unit of government benefits from the enhanced revenues associated with new growth. But it also typically assumes the long-term liability for maintaining the new infrastructure. This exchange -- a near-term cash advantage for a long-term financial obligation -- is one element of a Ponzi scheme. The other is the realization that the revenue collected does not come near to covering the costs of maintaining the infrastructure. [...] The reason we have this gap is because the public yield from the suburban development pattern -- the amount of tax revenue obtained per increment of liability assumed -- is ridiculously low. Over a life cycle, a city frequently receives just a dime or two of revenue for each dollar of liability. [...] as with any Ponzi scheme, new growth provides the illusion of prosperity. In the near term, revenue grows, while the corresponding maintenance obligations -- which are not counted on the public balance sheet -- are a generation away."

Scandalous. Also humorous-but-dismaying is that the Project for Public Spaces wrote early about Ponzi Planning as an April Fool's Joke in 2009 -- but it's actually sadly real.
Posted by Joost Bonsen at 19:54