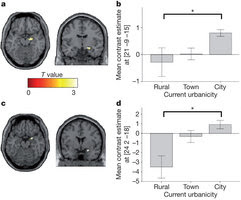 "Cities, recent research shows, can make us crazy [they] exact a mental toll. People living in an urban setting are 21 percent more likely to experience an anxiety disorder, and 39 percent more likely to experience mood disorders. [...] Last week, German scientists announced that they had found, for the first time, the specific structures in the brain affected by city life. Using brain scanners, they demonstrated that people who lived in cities showed a greater stress response in the amygdala, a brain area that processes emotions. And a second structure, which helps regulate the amygdala, showed a heightened stress response in people who were raised in cities, according to a report in the journal Nature. The discovery suggests a specific mechanism by which cities, with their steady stress, might unbalance parts of the mind. Scientists can now look at particular aspects of urban design -- a particular layout of streets, say, or the preponderance of straight lines -- to see which ones cause the signature brain changes. Andreas Meyer-Lindenberg, one of the German scientists who led the research, says he has already begun to look into just these sorts of questions. One of the answers, it is already clear, will be to better integrate nature into our urban landscapes."

Fantastic possibilities are emerging here, including finally data-driven urban planning and design based on randomized controled trials and neuropsychological evidence! In addition to the visual dimension of seeing greenery, I'm especially curious about the senses of smell and hearing -- i.e. stench and noise -- the olfactory and auditory dimensions!
Posted by Joost Bonsen at 16:19